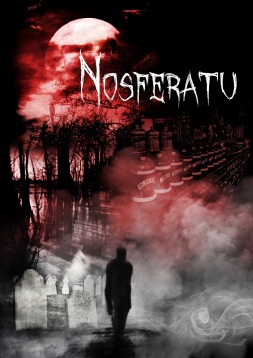 We were kindly invited to come and play Nosferatu with Jane, from Norris Box after she won the weekly competition! It was great to play a game before our Time Run Extravaganza next week to get a feel for each other’s play styles. Thanks again Jane 😀
So, with a game chosen and a date set, we headed off to Leeds to form our team of Jane, her hubby Chris and obviously Ian and myself!

Theme:
“It is currently 1841, a time where the presence of Vampires has existed and been well documented for many centuries. You are in a small region of Romania, West Transylvania, investigating the untimely deaths of your close friends. Upon examining their bodies, all signs point to the presence of an infamous Vampire. You must use your skills to identify and find the most dangerous Vampire known to exist in the current world, Nosferatu. Will you become the prey or the predator?”

The theming was nice, and finished to a good standard. There was a good use of soundtrack within in the room, and lots of space, all the rooms were very spacious and we never got in each other’s way.
Immersion wasn’t all encompassing, there were a lot of moments I was well aware we were in an escape room, but even though the mechanics of the puzzles were quite often not in the theme, the actual content of them were.
There was a mix of technology and padlocks in the room, and sometimes that use of tech was over done and didn’t add anything to the room.

Game Play:
A strictly linear room, although this was the case, the puzzles were presented in such a way that it took team effort to solve all of them, which was good design. The puzzles were exclusively logic, with multiple parts to decode and decipher.
There were some small physical elements, but nothing strenuous.
The flow was very good, the room itself in Escape Reality can give you a clue as to where you’re to solve next, as the puzzles are numbered for the hint system (this can be seen as a bonus, or a hindrance depending on your play style)
The puzzles were all logical, and created team-work and encouraged communication. Whilst there were still some moments of working out and introspective play! They all had nice ah-ha moments and were entirely solvable and logical
The only gripe I had was that there was a jigsaw type puzzle  (admittedly I didn’t do cause it was a jigsaw, and we all know how I feel about them!) that just felt like a bit of a filler puzzle.
There are moments of “puzzles” which are just releasing mag-locks I found these aspects rather uninspiring.
For a team of enthusiasts I recommend 4 or fewer. Newbies take a 5, there are some tricky brain teasers in there!

Clue System:
Escape Reality has a clue system that is unique to their franchise. You are given an iPad which includes your countdown timer, and also a QR code scanner. At various points in the game there are stickers next to each puzzle, these are numbered (so in themselves give you an indication on how you’re to approach the room) – if you are stuck on a puzzle you can scan the code, and get a solution (with a penalty of +5 minutes to your time) or you can press a hint button and the game host will come into the room to give you a hint (free of time penalties)
I didn’t like this, I don’t like self cluing my games at the best of times, and I dislike like getting penalties for needing a hint! (I feel it makes the player feel defeated using the codes for a hint!) – of course this might work really well for super competitive people, it’s just not my cup of tea!

Game Host:
We had the ever lovely Pateek again! He was friendly and delivered a stellar briefing again! We didn’t need to call him as we completed the room with no hints!

Did we escape?
Yes, in 42 minutes, earning us 3rd place on the leaderboard!