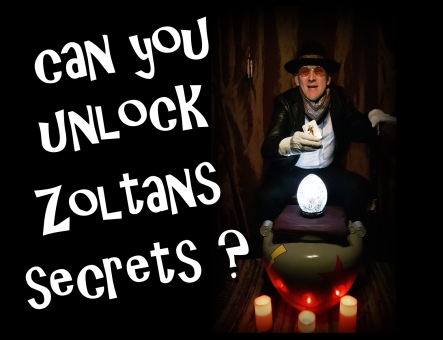 Theme:
“Zoltan the magician has been perfecting his new illusion, but not been seen for months. Can you unlock the mysteries of Zoltans inner sanctum and discover what has happened to the greatest illusionist of our time?”

A lovely light, bright large airy room.
Simply decorated but to great effect, the room was placing its emphasis on the puzzles, which really shone through. Everything placed in the room was there with meticulous reason and thought, which really aided in the game play.
The immersion was good, and to play the game you felt like you needed to get into the headspace of the infamous Zoltan to solve his puzzles, very nicely done!
The space was large enough to accommodate the maximum number of players, there was plenty of “elbow room”
The room was clean and welcoming and was a lovely place to spend an hour in!

Game Play:
A wonderfully linear game (at least how we played it, our game host said there were some parallel tracks but we tended to work on every puzzle together!)
Excellent puzzle design with an emphasis on words, logic and observation (so it played to our strengths) There is no physicality in this room, it’s purely a mental affair!
Each and every puzzle had its own excellent ah-ha moment and these just came thick and fast!
Every single puzzle was a delight, and it was clear this is a very well thought out room with some unique puzzles and some classic escape room puzzles!
The skill in the puzzles design was joyous and we spent the entire time in the room just loving the ah-ha moments and discovery the puzzles took us on.
The flow was sublime, there were no sticking points and it was perfectly clear how every clue related to every puzzle. Such a slick, well designed room!
Enthusiasts, this is a must do…. you’ll really appreciated the craft and perfect logic in all the puzzles.
Newbies, this is a great room. It’s so logical and would make a great room after you’ve tried a few… it’s in no means an easy room!

Game Host:
Ben was our game host, he delivered a good brief and was welcoming and friendly. He ran our game with ease and delivered us perfect nudged in the right direction!

Did we escape?
Yes, in 39 minutes! (a testimony to how well the game played and it’s lovely logical puzzles)