This is gonna be a long one, “Utopia” and “Dystopia” fit so perfectly together that it is only fair to give them a joint review! 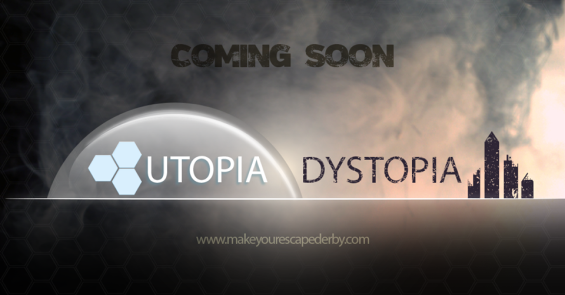 We were very kindly invited to Make Your Escape to play their brand new games “Utopia” and “Dystopia” – They’re not open to the public just yet, but when we played them they were pretty much spot on and ready to go, so look out for them opening in the near future!
We were highly anticipating these 2 rooms after the heavy story telling in “The Signal” and the sheer genius of “Spellbound” – but would “Utopia” and “Dystopia” live up to expectations… read on to find out!
“Utopia” and “Dystopia” are at their heart, battle rooms, but as there were only 2 of us, we chose to play the 2 games back to back, taking on the grim Dystopia first, followed by the pristine and clinical Utopia. This is the order recommended by Make Your Escape and I would urge anyone who is willing to do them back to back, to play in that order.
*As they games are not officially open, theme descriptions are written purely from my memory so as soon as I get the official blurb I will post that up instead, as I am bound to have forgotten/missed something!

Theme:
“Dystopia is set in an alternative Future in Derby, cast out from the Bliss of Utopia, you’re put into a world that is in disarray torn by the disintegration of society and the disappearance of members of the DJM, and we’ve been sent to investigate these missing members.”

Dystopia looked great, with just the right amount of decay, and a great colour palette to compliment the theme. Immersion was excellent, with the use of video, audio and lighting all creating the perfect atmosphere. Story was delivered throughout the game which only aided in the immersion and creation of a real world. The space was large and well lit once into the main game!

Game Play:
A game which expertly moved from linear to open. With excellent puzzles throughout, mainly focusing on logic, observation & word, with a little bit of physicality thrown in. What was wonderful was the interaction with the world, through all its puzzles it was very hands on and used the space, decoration and props to really integrate the puzzles into the story.
Each and every puzzle was clever, yet logical and solvable with wonderful Ah-Ha moments, there was no ambiguity which, leading to clear answers gave a wonderful feeling of progress throughout the room.
The flow was outstanding, with excellent signposting and not sticky or illogical moments.
The amount of story that is delivered via the puzzles and in the room is so detailed, this is really a room to saviour and experience every single second, definitely not one to rush!

Clue System:
Clues are delivered via a screen.

Game Host:
Our game host was perfectly in character as a janitor of the apartment block in Dystopia. He played it brilliantly with just the right amount of sass and enough dysphoria to make us slightly unnerved & apprehensive of the world we were about to enter.

Theme:
“Utopia strives to make society perfect, whilst battling the DJM movement in Dystopia. Their perfect world is about to be turned upside down by the DJM and you’re trying to get to the bottom of what is going on!”

Sterile, Clinical, Futuristic. Utopia looks pristine, with bright white walls serving as a complete contrast to the dank setting of Dystopia. The immersion again was excellent with the use of lighting, sound and video leading to a real world environment. Utopia is pretty too, the slickness & simplicity in the design of the room is wonderful.
The space is large, and very well lit. Story was delivered throughout the game which only aided in the immersion and creation of that real world.

Game Play:
A more linear game than Dystopia, Utopia relies heavily on it’s use of technology, but still, puzzles were paramount in this game, with them focusing on word, logic, math and physical puzzles.
The puzzles were all logical, with clear answers and great interaction with the technology giving wonderful ah-ha, and great story driven moments.
The puzzles were all perfectly in theme for the world and story and really helped to solidify the world and story together. It felt much more of a cohesive real world than any other highly tech game I’ve played!
The flow of the game was excellent, and signposting was clear and simple. Tech buffs will love this room, and its excellent narrative will thrill with its twists and turns (which must be played to find out! No spoilers here!)

Clue System:
Clues are delivered via a screen.

Game Host:
Our game host, again was completely in character as one of Utopia’s clinicians, she was robotic, unnerving and ethereal. Which set the tone perfectly for the world we were about to enter.

Website: http://www.makeyourescapederby.com/
Price:
As soon pricing is released for Utopia & Dystopia I will update it here.