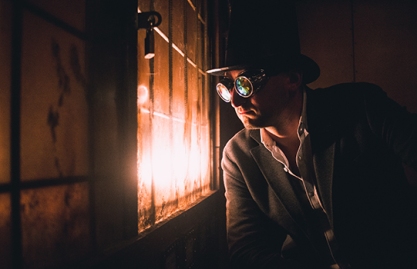 Theme:
“Some say that the inspiration for the character of doctor Frankenstein came from Johann Conrad Dippel, a German scientist, who was born in the Frankenstein castle. Could they be right? In the mystical world of steam machines and airships you have only one hour to revitalize a homunculus and unravel Frankenstein’s mystery. You will follow in the mad scientist’s footsteps to complete his final experiment and attempt to reanimate the body of Frankenstein’s Creature!”

The room looked great, with a real steam punk vibe that echoed the era very well. Quite immersive, with a good finish and attention to detail. There was a lot of detail and props to look at, but nothing that was outwardly confusing as a red herring.
A great space to spend an hour in, with plenty of discovery and interest throughout the game.
The space is large and lighting, unfortunately was quite dim. A little bit more atmospheric light would have helped tremendously.

Game Play:
A linear game that had a great mix of puzzles, logic, word, physical, observation.
The puzzles were all wonderfully on theme and perfectly logical and solvable with no logic leaps.
The ah-ha moments were good and once found, soloutions came freely and easily.
One puzzle in particular was a lot of fun to solve and interacted with the room in a unique way.
The flow was good, once we got going the first puzzle stumped us but this was mainly due to the low light levels (and my lack of working eyes – I forgot my glasses)
Signposting was very subtle with a lot of the connections being left to the players.
Overall a nice game that isn’t going to disappoint, but still has the feel and game play of a big franchise.

Clue System:
Clues were delivered via a voice over in the room

Game Host:
Our game host was good, his brief was short, but clues were delivered in a timely manner

Did we escape?
Yes, in about 50 minutes