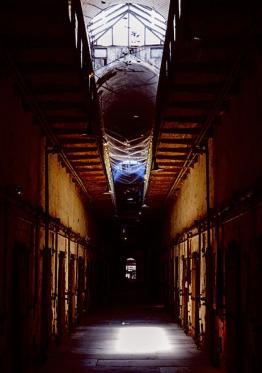 Well, back on British soil for not even a week and I’ve booked in 2 games… the first of which being Death Row. We had already played their other game “Lost Souls” so when a living social deal came about (who can resist a bargain) I snapped it up and it was nearly time for it to expire!
Lockdown Escape is situated at Evans House in Warrington, a social hub and business centre, which houses various businesses, social clubs and activities.

We parked up, and made our way up the millions (O.K., that may be hyperbole) of stairs to get to Lockdown, there is a lift available for anyone with ambulatory problems.

Theme:
“You have been LOCKED DOWN in a HIGH RISK prison for a crime you did not commit. You are on DEATH ROW and have to find a way to escape in 60 minutes and prove your innocence, before walking the GREEN MILE to the execution room.

Solve puzzles and find clues before it’s too late and you are sentenced to death by ELECTRIC CHAIR.”

Theming was decent in this room, if not minimal, and continued throughout the various sections. There were a few moments where theming was sacrificed due to puzzles, but for the most part, the scene was set well for the situation we were placed in.

Game Play:
The puzzles were a lot better than the “Lost Souls” room, and flowed well with the game being strictly linear.
There was 1 puzzle that was too ambiguous, which REALLY slowed us down. Puzzles in escape rooms should be clear cut, at no point should you be thinking “IT could be 3 or 4, and if you look at it like THIS it could be 7” – sometimes a case of overthinking could be to blame, but I feel in this case it was ambiguity, considering that 1 part of the puzzle was clear cut, but none of the others followed suit. (this could be rectified very easily by applying the same thing to all other parts as was on this 1 part)
The first room flowed well and had some nice puzzles, from there on though it seemed like the puzzles were designed to stall the natural flow of the room. The use of one puzzle being very similar to one in “Lost Souls” (to me anyway) felt a bit defeatist at the end of the game!
THAT being said, I did enjoy this room!

Clue System:
Clues were delivered via a mobile phone, as many as we needed (and we needed a few!) Clues were direct and to the point!

Game Host:
Craig was out game host, very chatty! He was clearly watching our game very closely with hints coming at the perfect time.

Did we escape?
Yes… and no… We were 2 minutes over time so we did escape the room, but were allowed a couple extra minutes!