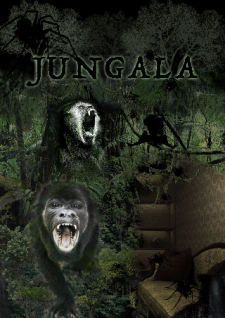 The theming in Jungala started of nice, with the living room setting creating an amount of immersion. As the game progressed, the immersion started lacking, the later rooms being quite bare in their decoration (they could have put more into the jungle theming) however, they were still nicely done and to a good standard.
The rooms were very spacious and clean, and at no point did we feel like space was tight. Although I was very aware that I was in a “escape room” throughout the hour.

Game Play:
The game is strictly linear, with a decent range of puzzles. The room didn’t have a ton of puzzles, and at some points we overthought a couple of the puzzles due to an amount of ambiguity (which we did speak about with our game host after the game!)
Mostly logic based puzzles, with a small amount of physical (in the loosest sense of the word!) and a little bit of maths.
The puzzles were for the most part logical, but there was one puzzle with a large logic leap right at the end (I didn’t enjoy this puzzle, as it really didn’t fit into line with the rest of the puzzles in the room)
I would approach this game carefully as it can encourage overthinking, I think this could frustrate some enthusiasts. I would recommend a team of at least 4 for newbies, even though it’s billed as Escape Reality’s easiest room… it can be quite deceptive at times!

Clue System:
Oh…. the clue system. Escape Reality has a clue system that is unique to their franchise. You are given an iPad which includes your countdown timer, and also a QR code scanner. At various points in the game there are stickers next to each puzzle, these are numbered (so in themselves give you an indication on how you’re to approach the room) – if you are stuck on a puzzle you can scan the code, and get a solution (with a penalty of +5 minutes to your time) or you can press a hint button and the game host will come into the room to give you a hint (free of time penalties)
I didn’t like this, I don’t like self cluing my games at the best of times, and I dislike like getting penalties for needing a hint! (I feel it makes the player feel defeated using the codes for a hint!) – of course this might work really well for super competitive people, it’s just not my cup of tea!

Game Host:
Pateek was our game host and was very friendly and incredibly thorough in his briefing. He was excellent when we called for hints and steered us in the right direction!