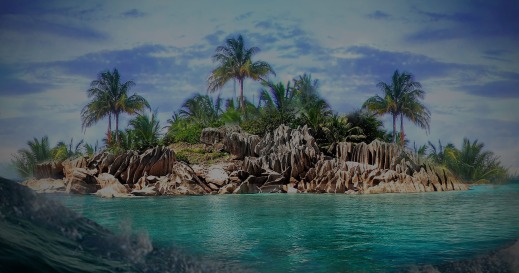 Theme:
“Congratulations! You have just won once-in-a-lifetime trip to the Island. You will love it so much, you wouldn’t want to leave … or be able to. Even if you found your way back, the world that you left behind would never be the same.”

The best way to describe this theme is Lost inspired. Loosely based around the Lost story, we have crashed on an island and the plane split in 2, we have to stop the electromagnet from going off and escape.
The best way to describe the decoration is lost… where was it? The room was unscrupulously bare, although this did mean there were no red herrings, there was also nothing to suggest the theme save for a couple of posters on the walls. It was clean and in good repair, but it was just so so minimally themed that I really didn’t feel there was any story or immersion.

Game Play:
Thankfully the lack of theming didn’t impact on the puzzles. There was a good range of puzzles which covered observation, logic, word, & maths. There was a tiny amount of searching and nothing physical.
The room was fairly linear, and had a lovely flow. We sailed from one puzzle to the next and rarely hit any blocks.
The start of the game was a lot of fun, it encouraged team work and was an opening that we had seen in 1 game before, without giving spoilers it’s hard to say, but I’ll just say again.. “The plane split in 2” – That should give you the idea for the start of the game.
All the puzzles were perfectly logical and solvable and all had nice Ah-ha moments.
This room played to our strengths (in a good room we will find that we get stuff that the other hasn’t) and each puzzle left us wanting to solve the next.
It felt like this was more of a puzzle room with a loose theme rather than an immersive story telling room, that is something to consider when booking… we enjoyed the puzzles a lot, but overall the room lacked character and story.
Enthusiasts, don’t take more than 2. The puzzles are classic and you won’t want to miss any of them. This room is more suited for newer players, but I still wouldn’t take more than a team of 4.

Clue System:
Clues were delivered via a screen in the room.

Game Host:
Laura was our game host, she was lovely, friendly and seemed to enjoy playing games herself, so we had a good chat at the end of the game!
She ran our game well, saying that we only had 1 hint and I trust had we needed more that they would have come at the perfect time!

QUICK Tick Tock Unlock is on Wowcher for a limited time only, £34 for 4 players saving 43%!