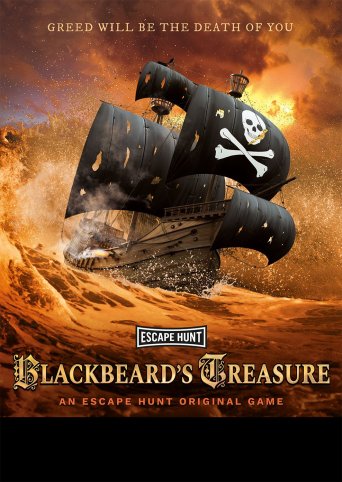 Theme:
“Step onto a pirate galleon in the middle of a battle for control of the High Seas. Your captain, the terrifying Blackbeard, has just been killed and his ship is shot to pieces and sinking fast.

With no chance of victory, you and your scurvy shipmates decide to jump ship – after helping yourself to the contents of Blackbeard’s legendary treasure chest.

You’ve broken into his cabin to grab all you can, but now the door has jammed shut and you’ve just 60 minutes to escape; any longer and you’ll drown – if the sharks don’t get you first.”

The room looked great, with a lot of detail going into the set, giving a real feeling of immersion. The room was large enough for 6 players, and had a good sense of discovery. Lighting was adequate if not a little dim in places, but this did add to the atmopshere of the game and didn’t impact game play.

Game Play:
A linear game that was quite search heavy in the first part of the game, giving way to some super puzzling later in the game.
Puzzles were varied and included Searching, teamwork, skill, chance, observation, smell, logic and sound.
All the puzzles were very hands on and all came from within the room, nothing was out of place or forced, the puzzles felt like a natural extention of the story and theme.
The puzzles were all logical and fair, with lovely clear ah-ha moments.
The flow was excellent, with us never feeling lost, stuck or slowed down by the room itself, Signposting was good, if not subtle but all within the paramaters of the room and not too much as to spoonfeed or baby-step you through the room.
An excellent game for newbie teams as there is plenty to do without it being utterly overwhelming or brain-busting.
For experienced teams, it is a very good piratey romp with some nice moments and quirky touches!

Clue System:
Clues were delivered via a microphone in the room.

Game Host:
Jenny was our game host and she was great, friendly yet professional and delivered nudges with perfect timing!

Did we escape?
Yes, in 33 minutes… top of the leaderboard… for now!