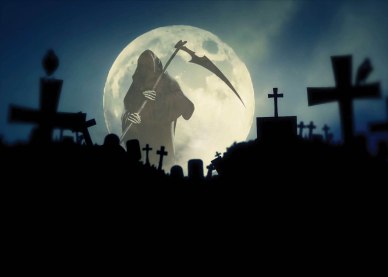 Theme:
“As a mortal, to enter your afterlife, you must first die.  How you die is your choice but all must enter through the void of transcendence.

Only the brave will follow the light, crawl out of the grave and go to hell and back. Logical thinking and teamwork is what you need to ensure that when your hour is up your name is found in the Book of life.

Will you escape and be granted your life back, or will you be left to wander the afterlife for eternity?”

Afterlife looked great, from the understated beginning we were treated to a immersive reveal that led to a room that could have been from the set of Beetlejuice! Fully themed and with great attention to detail, whether in the graveyard, hell or others… each area had its surprises and was delightful in its theming and distinct styles. A creepy soundtrack with humourus interjections from the devil himself set a dark-humoured tone to the game.
This room is not massive, but the main area is more than big enough to fit 5 players in, and all parts of the game can eventually be observed from the main area, so no worries there!
The beginning of the game is very dark, eventually this gives way to well lit, but ambient lighting later in the game. Excellent choices that only serve to tell the story perfectly.
A very, very well designed and excecuted set and the level of detail is stunning!

Game Play:
A game that weaved beautifully from linear to open and back again, with  almost every puzzle type imaginable… Logic, word, riddles, sound, observation, maths, skill, dexteritity, searching, critical thinking, outside the box thinking… I could go on and on. The range of puzzles was excellent and always kept us on our toes, and I even enjoyed the jigsaw!
Each and every puzzle was clear and concise in its logic, which ultimatley led to many a great “ah-ha” moment throughout the game. There was only one puzzle which felt a little clunky in its ambiguity, but with a handy failsafe to clarify things,  X-it have it covered that they will never let frustration set in! That being said, it was a lovely, well excecuted puzzle that some teams will certainly acheive easily and requires great logic and teamwork skills.
The flow of the room was superb, with the main section being open it was nice to be able to bounce around and work on different things and chop and change tactics, we never once got stuck or confounded on a puzzle. A game which was just a delight to play.
Signposting was clear and never left us in the dark this just added to the logical smooth nature of the game and made for a chilled experience in the room!
A really great game that just has masses of excellent quality content, which is as pleasing asthetically as it is cerebral.

Game Host:
Clare was our game host (ably assisted by Mitch) and her hosting was great, sending us clues at precise times, and never letting us get frustrated. She is clearly very passionate about escaping, having played quite a few, this passion flows through into her game.