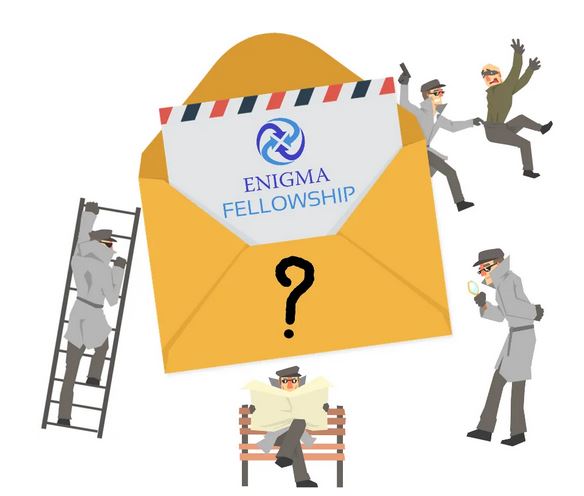 What is the Enigma Fellowship?

It’s a subscription based service, that offers immersive play at home escape room style games, that use multimedia websites to support the game, each game is delivered to your door for you to solve the mysteries hidden within.

“Ever wanted to discover secrets of ancient cultures and lost civilizations or travel to exotic destinations? Does participating in grand Roman and Mayan games excite you? How about delving into the mysteries of the 1001 Arabian Nights? Does solving a murder on the orient express sound fun?

If such adventures appeal to you and you enjoy playing escape room style games then the Enigma Fellowship is the right place for you. Solving riddles, deciphering codes, discovering secrets and thinking outside the box are just some of the fun things that await at the Enigma Fellowship.

An envelope arrives to your doorstep every alternate month and takes you on an adventure. You will be solving murder mysteries, defusing bombs, unraveling mystical codes and deciphering ancient languages from the comfort of your own home.”

“Prof. McEwan, a renowned archaeologist, is missing. His research group thinks he may be in danger. He was searching for a lost artifact of great significance. The Enigma Fellowship has been engaged to locate him and help solve his quest.”

Enigma Fellowship arrived on out doorstep innoculously enough, looking to be a non-descript series of envelopes, it was only when we opened up the envelopes and started playing we realised the rabbit hole we were about to go down.

The Lost Knowledge is PACKED full of content, it is admirable how much “stuff” is put into this game, from detailed scientific papers (legit too, according to the creator) to the smallest detail to aide with puzzles, The Lost Knowledge leaves no stone unturned, and it is produced slickly and professionally too. I felt as if we were a remote task force than had been sent a covert mission, very much with a “for your eyes only” type feel!

The story is delivered not only through the paper aspect of the game, but an accompanying website too, I would reccomend if you can getting this website on a laptop/tablet/computer as you will be interacting with it for a good part of your game, we soon realised doing so on a mobile (although it is formatted correctly) was a bit frustrating!

The story is an integral part to The Lost Knowledge and was delivered via audio, with the accompanying text (this is great for accomadating any hoh members of your team)
The story was detailed and comprehensive, with a fully realised world such as Enigma Fellowship creates, it’s hard not to be captivated and get sucked in.

Game Play:
A linear game at its core, which had a range of puzzles, but favoured word, logic, riddles, problem-solving and observation. Puzzles were well on theme, and given the “paper” restrictions, felt very intuitive and intrinsic to the world that the combination of the paper aspects and website created. (I feel the puzzles and story would translate beautifully to a real life game!)
Most of the puzzles had good ah-ha moments, and were logical in their soloutions. We found difficulty in getting the game started (this always seems to happen when playing a new company, as you have to learn the paramaters and mechanics of how their game works!) but once we cracked the mechanics (and swapped from phone to pc) we got along with no hiccups.
The logic in the majority of the puzzles was good, I have to give a mention to the final puzzle of the game, a delectable mix of logic, codebreaking, observation and a little maths that all came together brilliantly to create a fantastic finale to the game.
There were a couple of puzzles that didn’t quite work for us, and led to us massivly overcomplicating them, howeve, Enigma Fellowship are very intune with their customers and regularly take into consideration any and all feedback so I’m sure they will look for ways to stop other players doing what we did! (Really have a lot of respect for companies that openly and honestly accept feedback! Kudos to Enigma Fellowship)
Signposting was very subtle, but this was all in keeping with the theme of the game, and with it being a longer game it is fine to leave some avenues unlit, so to speak, to let the players light the way themselves.
Flow was good (once we got going) and there is a natural break in the game (much appreciated with the longer play time) it’s not a particularly fast paced game, more one to savour and take it all in.
Overall “The Lost Knowledege” was a unique and interesting take on the play at home style of game, a lot more factual than ones we have played and this aided in it feeling like a very grounded game that takes place very much in our reality.

Clue System:
Clues were available to access alongside the computer interface in a seamless way. Enigma Fellowship also offers a “Virtual Gamemaster” who will aide you through the game if you’re new to puzzles and escape rooms

Website: https://www.enigmafellowship.com/
Price:
One Time Package: $22
Subscription: $22-$123 depending on how long the subscription is for!