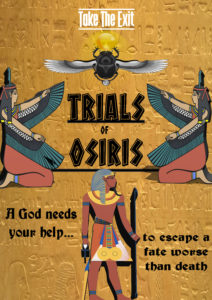 Theme:
“Taking over from Howard Carter’s research you and your team of explorers are now trapped in a Pyramid! With just 60 minutes on the clock, will you be able to escape?”

Osiris looked really pretty, a super large room which was decorated floor to ceiling in a truely egyptian style, complete with a small market full of trinkets and accoutrements!
The floor was covered in sand, this was a wonderful touch until the end of the game, where the sand was distrubed and the space got very, very dusty (something to be aware of for asthma sufferers, it will get on your chest – it did mine and I only have very mild asthma)
There is plenty to look at in Osiris, it is a feast for the eyes, and very little is just decoration, that is an impressive testitment to such a heavily themed room!
The room was bright, with no lighting problems what-so-ever. A very nice room to spend and hour in.

Game Play:
A linear room that had a good mix of puzzles, including seaching, word, translation, observation, math, logic, phyiscal, and codebreaking.
The puzzles were all fairly intrinsic to the room, and felt in theme and correct.
They were all perfectly solvable, and logical and quite enjoyable.
HOWEVER the room suffered the same problem as Doll House *I have copied and pasted as the issue was nearly identical*:
Now, I don’t normally talk about locks, but almost every. single. lock. was 4 digit.
There were a LOT of 4 digit locks at least. I always harp on about how it doesn’t matter what locks are used, so long as the puzzles are good; and this still rings true, BUT when you’re a team of 2 and the puzzle gives YET another 4 digit code, this gets tedious and wastes time. The puzzles were enjoyable and some were unique, but a little more inspiration could have easily made those puzzles open a word, directional or even a word/letter lock, leading to much more interest and signposting in what was needed next, making the game run smoother and fuss free.
I suppose my biggest grip was the many, many 4 digits were a massive time sink for us as a 2 player team, the room works, the puzzles work… but man I was fatigued by the locks by the end of it.
The puzzles were all perfectly fine in their logic, solvable and enjoyable.
The flow in the room was decent, the linearity was smooth.
Signposting was ok, there was small amount where needed but mostly the players were left to make their own connections.
Overall this game is enjoyable, with some nice moments despite the abundance of 4 digit locks.

Clue System:
Clues were delivered via a walkie talkie.

Game Host:
Chris was out game host, and new owner of Take the Exit, he was friendly and clearly passionate about escaping, he gave us a good brief and ran our game well

Covid19 Safety:
Masks weren’t required, but there was plenty of handsanitizer and a cleaning station for the rooms inbetween games, this was good to see!

Did we escape:
Hmmm… techinally no, but we went at the MOST 1 min 30 over, taking into account the lock situation then I would say we escaped (Over time) 😉