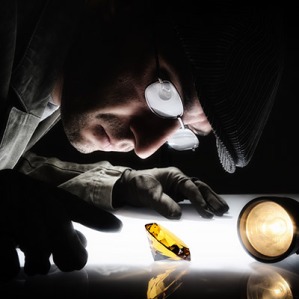 Having played Gem Runner at Lucardo’s Manchester branch all the way back in 2016, we were interested to see how Rawtenstall’s version compared, in both puzzles and set design.

Theme:
“The famous 190 carat Saratov diamond from Russia is being deposited at the central bank in Rawtenstall. Lucardo has hacked the security system, buying your team a one hour window to steal the diamond. Can your team pull off Rawtenstalls biggest ever heist?”

Theming was excellent, with the Bank being small, yet well decorated, clean and bright. There was nothing out of place or distracting yet there was just enough detail to create an immersive environment.
The theme continued into the vault, which was the most amazing use of space… it gave the room an incredible sense of space and upped the immersion and reality of the game!
The room was large enough for the max of 6 and well lit throughout.

Game Play:
An open game that became linear at crucial points. Puzzles were mixed and included Math, observation, word, logic, and a small amount of physicality.
The puzzles all had great ah-ha moments, and were perfectly solvable and logical. Some being quite clever in their logic & design. All the puzzles were kept in theme (bar perhaps one, but it’s too fun to nit pick over!)
The flow was impeccable, with subtle signposting (Which if you can recognise and follow, will help immensely!) there are no natural sticky points and you can tell this is a well tried and tested game.
It is similar to Manchester’s version and the more we played the more we remembered (Which led us to pick up pace considerably) – even though it had been 18 months!
A great beginners game, as the puzzles are logical and well put together them game will tax new players but not leave them baffled or feeling dense.
Enthusiasts will appreciate the unique setting and on theme puzzles.

Game Host:
Simon delivered a great brief and was a friendly and welcoming host, delivering perfectly time nudges throughout the game (I don’t think we had too many!)