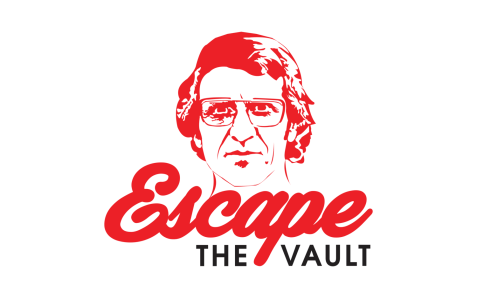 We were invited to try Brighton’s Escape the Vault by Will, one of the creators of the escape the vault and it was the reason for our most recent “down south” binge!

Be hired to rob the vault of word renowned arms dealer, Charles Fawkley.”

Escape the vault is in a fairly unusual (but not for Brighton it seems) location, tucked away at the back of a coffee shop! The coffee shop was an HSBC bank in its former life so Escape the Vault has made good well-rounded of the bank’s former vault.
The room was decorated quite simply but finished to a good standard. It was plenty big enough for the maximum team size of 4 and lit well.
The original bank vault and safes used within the room added to the theme of the room, and the clean decor led to a clear experience within the room.

Game Play:
An open game that compromised of logic, math and word puzzles. Being a shorter game – 40 minutes, which is reflected in the price point of the game, Escape the Vault is aimed more to the inexperienced and first-timer crowd, and it’s a great introduction to escape rooms.
Not too taxing that it becomes over encompassing and overwhelming, but with enough challenge to get the grey matter moving and it teaches the basics of escaping well.
The puzzles were all clear in their logic and had nice ah-ha moments that came with every solution. The game certainly had its own style and substance, being relatively focused on 3 digit codes, but this wasn’t to its detriment and it was always concise and solid when delivering answers to the player. All the puzzles fit into the bank heist theme well.
The flow was good, with us smoothly moving from puzzle to puzzle uncovering a little bit more story with each puzzles solved.
Sign Posting was well placed, newer teams may not entirely pick up on all of it as there are some subtleties, but for more experienced players, they will appreciate the subtle direction within the game.
A well rounded game, especially for people who want to dip their toes into the world of escape rooms.

Clue System:
This is where things get interesting… the clue system is a “getaway driver” called Terrence, who you can text via WhatsApp for a “Hint” or “Hack” on any of the puzzles. We didn’t have to ask Terrence for any help.

Game Host:
On a usual day, Escape the Vault doesn’t have a dedicated game host, the cafe handles the day to day runnings of the escape room. You are handed instructions shown to the room and then the game is between you and Terrence!
Unfortunately, this means that there is no-one watching over you as is the norm in the industry. HOWEVER, there is still a brief and H&S delivered via Terrence when you log into the whats-app chat. There is nothing inherently unsafe in the room and you are at no point EVER even close to locked into the room. After all, it’s about breaking into the vault and robbing it, not breaking out!