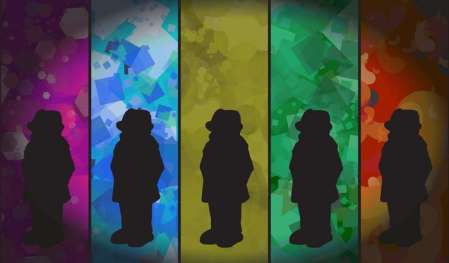 The location of Dr.Incognito’s secret lair has been identified. You’ve been sent on a Totally Terrific Top Secret Mission to stop them.

Equipped with nothing but your wits and your brilliant brain, you must correctly identify the real Dr.Incognito. Only with the correct name will you be able to stop their evil plans for world domination.

Once Dr. Incognito has been stopped, you will need to escape the Secret Lair before it self-destructs.

Dr Incognito looked fabulous, with a bold colour scheme backing up the perfectly cartoonish aesthetic. It was like walking into a comic strip. The was full of secrets, compartments, things to look at and interact with, all of which were used beautifully in the game play.
The atmosphere created in the room was incredible and somehow a sense of gravitas was created that underpinned the tongue in cheek nature of the game that just worked so very well.
A large room that will accommodate 6 players easily, well lit, yet still lit to create atmosphere.

Game Play:
An open game that was JAM packed full of puzzles of every type. Word, Observation, Logic, Physical, Teamwork, Deduction, RolePlay… there was something for everyone in this room.
The puzzles were all elegant, with clear concise logic. Whilst the puzzles were incredibly logical, they weren’t straightforward, and required lots of input and work to get to the answer, in the best way possible. They were all SO enjoyable.
The puzzles were all perfectly on theme, and it really felt like we’d stepped into this cartoon world, and the puzzles were an intrinsic part of it.
The was an interactive element used several times within the room, which only added to the immersion and fun within this room. Usually stopping playing in such a way would leave me frustrated but the way the mechanic was used was woven into the story so well, that it became a real highlight of the game for me, almost reminiscent of “I expect you to die”!
The voice over used within the game added to the gameplay with its interaction, in fact, the whole game has a sense of interaction and exploration that was a key factor in the success of this game.
Signposting was exemplary, as perfect as it could get without making the game too simplified.
Flow was excellent, a fast paced game that just worked beautifully and had no sticking points whatsoever.

Game Host:
Matt and Luke were our game hosts, and they were wonderful, enthusiastic, friendly and very accommodating, they clearly have a passion for games and this shows through in their design and execution, and in their hosting. Their skill for game design is perfection and I look forward to seeing what the deliver in future games!

Did we escape?
Yes, in around 40 minutes