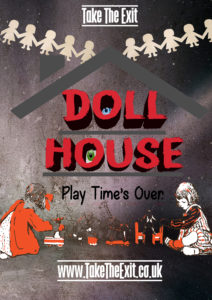 Theme:
“As paranormal investigators it’s your job to investigate the tragic events of the Mason family. Ever since poor Lucy Mason disappeared, the house on 7 Silver Street remains empty except several dolls that appeared after she went missing…”

The Doll House makes a good attempt at creating a creepy atmosphere, the room you’re put into is pitch black, and being in a pitch-black room with a lot of creepy dolls lifelessly staring at you is rather creepy.
The décor in the room was kept quite simple. With the main focus being on the dolls (which a keen eye will spot were nearly all named after Drag Queens!)
Unfortunately, that was it for decoration… the space expanded but still kept the same simple decoration, albeit with less dolls.
The room was not huge, and with 6 players you may find yourselves getting a bit cosy at times.

Game Play:
A strictly linear game with a fair assortment of puzzles which leant more towards searching/observation and logic.
Now, I don’t normally talk about locks, but almost every. single. lock. was 4 digit (with a couple of 3/colour locks thrown in) I always harp on about how it doesn’t matter what locks are used, so long as the puzzles are good; and this still rings true, BUT when you’re a team of 2 and the puzzle gives YET another 4 digit code, this gets tedious and wastes time. The puzzles in Doll House were good, a little more inspiration could have easily made those puzzles open a word, directional or even a word/letter lock, leading to much more interest and signposting in what was needed next.
The puzzles were all perfectly fine in their logic, solvable and enjoyable.
The flow in the room was decent, once we got going the game built up momentum to the end.
Signposting was ok, there was small amount where needed.
Overall this game is satisfying and enjoyable, despite the abundance of 4 digit locks.

Clue System:
Clues were delivered via a walkie talkie.

Game Host:
Chris was out game host, and new owner of Take the Exit, he was friendly and clearly passionate about escaping, he gave us a good brief and ran our game well

Covid19 Safety:
Masks weren’t required, but there was plenty of hand sanitizer and a cleaning station for the rooms in-between games, this was good to see!

Did we escape?
Yes, in about 40 minutes